"I thought we've been playing fighting"

Boxes are on stage. The playground is set. The cave men appear together with beards on their face, trainers on their feet. They sit, they yell, they sing and they play fighting. I laugh, watch and remember those times. They take us back to childhood, to our conflicts and to those small moments that we treasure with a sweet-sour taste. That is exactly what you get from Jake and Pete: The performance is honest, human and creative. It leaves you thinking. I couldn’t ask for more.

A piece of physical performance which contains a lot of symbols and songs. Does simple physical action can become an emotional meaningful expression?

“Siblings. Even if we do not know how much you bothered ...
When the danger of a second coming will not hurt ...
We tease each other, but others cannot,
Because I do not love us like we do each other ...
And that's our strength.”

This is a beautiful story about two brothers, which try to convince us, that their love is much deeper as they show.

And even if the world grows old, the human remains a child…

In their “play” - in all his impacts - Jakob and Pieter Ampe abduct us in the more or less distant, well-known world of childhood, of siblings’ relationship. With meticulous accuracy in the matter of “building bricks”, supreme creativity in the hiding of thoroughly full-grown bodies, remarkable skills in the using of their vocal cords (let’s say from a certain dissonance to a special treat of “life-music-presentation in two voices plus special effects as sound changing-box-installation”) they let us experience endless fun. No politics, no moralizing, no criticism. Instead all the more of subtle humor - a welcome alternation to the occasionally heavy stuff we get presented by the Spielart Festival!

From the moment that brothers Ampe appeared on the stage they were in hundred percent present here, now. They didn't have to 'act' in some exaggerated way and create characters. Peter and Jakob represented this kind of actor's presence, which is absolutely required to keep performance on the professional and interesting level.

Collaboration with boxes on the stage showed perfectly differences between body flexibility and stiff geometry of wooden object and how the body is trying to adapt to limitations.

The performance is the bodily story about friendship. The body language turns out to be a universal medium, which is clearer to the audience than anything else. Body speaks stronger than any intellectual messages.

Performers built dramaturgy by relationship between brothers and between voice and movement. On the beginning they screamed. It was without any reason to do it- like children, who use this kind of expression, but after, they very often do not remember why they did it.

What is it to be siblings? It is definitely not easy: Innocent teasing turns into a physical competition of the question who is the stronger one; An attempt of emotional expression from the one side meets sarcastic refusal from the other one. 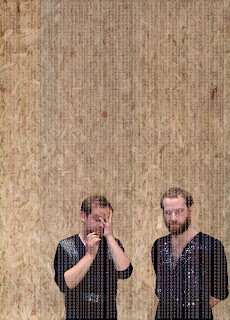